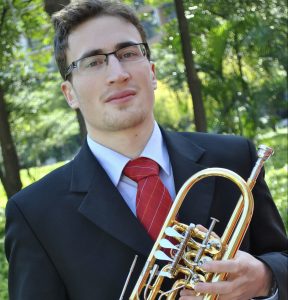 Luis Abicht finished his diploma at the University of Music and Performing Arts Vienna with distinction in October 2016. He is currently playing as a Substitute in the Stage Orchestra of the famous Vienna State Opera and at the Volksoper Wien. Beside many other classical Orchestras he is also playing in contemporary ensembles such as the Klangforum Wien and was also part of the Ensemble Modern Academy in 2015. As a soloist he played the Concerto in Eb-major for Trumpet and Orchestra by J.B. Neruda with the Orchestra of the “Musikfreunde Baden” in 2014 and recorded a CD of three pieces of the French composer André Jolivet for Trumpet and Piano.