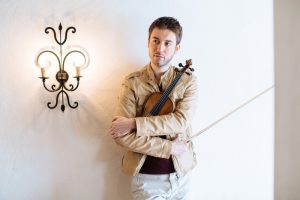 First Prize winner of the International Competition held at the Niccolo Paganini Academy of Music in Genoa, Italy, the romanian violinist Tudor Andrei is rapidly gaining a reputation as yet another bright talent emerging from Romania.
Tudor has already performed a large number of concerts in important halls in Romania. Starting with 1999 he toured Switzerland, Italy, Germany, Norway, China, Austria, England and others. He was invited to appear on various TV and Radio shows.
He played as a soloist and orchestra player in venues such as St. Martin’s in the Fields, St. John’s Smith Square, Royal Albert Hall, Royal Festival Hall, London Eye, White Hall, St. James’s Church, Duke’s Hall of the Royal Academy of Music in London, Troldhaugen and Ole Bull’s Concert Halls in Norway, Liszt Saal of the Konzert Haus and the Universität für Musik und darstellende Kunst in Vienna, Paganini Conservatoire’s Concert Hall in Genoa Italy, Bucharest Philharmonic and Great Hall of the Radio Society, Beijing Polly Centre in China, to name a few.
In 2016 he was on tour as a concertmaster and soloist with New VIS Orchestra in Taiwan, Malaysia and Singapore.
He had the chance to have mentors such as, Josef Hell, Remus Azoitei, Joshua Bell, Julian Rachlin, Liviu Prunaru, Benjamin Nabarro, Sam Haywood, Iain Brown, Tadashi Imai and as an orchestra player to work with conductors such as Sir Colin Davis, Yan Pascal Tortelier, Pietari Inkinen,Trevor Pinnock, Simon Rattle.
He is also very active as a chamber musician sharing the concert platform with different chamber music groups.
Tudor Andrei was artist-in-residence at the Romanian Cultural Institute in London.
In 2012, he has played in a Gala concert at the Romanian Parliament, in front of the President of Romania and in a concert in Austria, in the presence of Princess of Schwarzenberg
He was part of a TV Documentary broadcasted on ORF Television.
In 2010 he graduated from the Royal Academy of Music in London, then he moved to Vienna where he continued his studies for one year with professor Josef Hell.
Tudor Andrei comes from a family of music teachers and teaching represents the other wing of his musical life, having a special affinity for it, since he was 13.
Starting with the age of 15, he was teaching privately in Bucharest, until the age of 19 when he left for London.
Great Britain was the country where he established himself as an efficient teacher, being even from his arrival the private assistant of his Royal Academy of Music Professor, Remus Azoitei.
He has a Degree in Teaching from the Royal Academy of Music in London, during the Course, he has been part of many projects involving pupils of all ages, nationalities, backgrounds and IQ levels.
Most of his students are today part of orchestras(G.Enescu Philharmonic, Radio Orchestra of Bucharest, Orpheus London, etc), chamber music groups, young teachers, or still developing on stage, winning Competitions in Romania, Italy, Great Britain, or being accepted at Junior Programs of the Royal Academy of Music, Royal College of Music, Guildhall School of Music, Trinity College in London and other Music Institutions in Great Britain, to name a few.