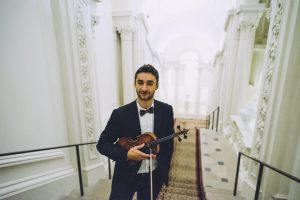 Spasoje Spasojević was born on October 16th 1992 in Serbia. He started his musical education when he was 7 years old in music school “Kosta Manojlović” in the class of prof. N.Dejanović. He finished music high school in the class of prof. J.Vukajlović and same year enrolled at the Belgrade music academy in the class of prof. M.Stokić. Further studies he currently continues at “Prayner Konservatorium”, Vienna, in prof. Tymur Melnyk’s class.
He further regularly takes masterclass and workshops with prominent mentors and violin teachers, among others with T. Varga, Z.Milenković, E.Kravceva…
He was awarded numerous prizes at violin and music competition, among others are 1. Prize at the musical competition “Kosta Manojlović”, 1. Prize at the national music competition of Republic of Serbia, 2. Prize at the competition „Vatroslav Lisinski“, 3. Prize at the international music competition Niš and 3. Prize at the string festival in Sremska Mitrovica.
First experiences at playing in an orchestra he received while in music school, as a concertmaster of the schools orchestra, simultaneously playing as a member of “TIS” piano trio, which consecutively wins a number of prizes: 1. prize at the national music competition of Republic of Serbia, 1. Prize at the
national music competition „Vatroslav Lisinski“. Expanding orchestra playing experience he became a concertmaster of a chamber ensemble „Taurunum“.The ensemble was awarded several prizes: 1. Prize at the musical competition of Republic of Serbia and at the musical competition “Guarnerius” (Belgrade).
Concerts and recitals internationally include: Moscow (Cathedral of Christ the Saviour), Budampest, Munich (Carl Orff Hall), Sarajevo, Greece (Volos, Corfu), and in home country every large enough hall for a chamber ensemble (Kolarac, Belgrade Philharmony hall, City Hall, Clu Guarnerius, Hall
„SKC“.
Before becoming a current active member of the “New VIS Orchestra” and “Regina Angelorum” Orchestras in Vienna, he was the concertmaster of the youth philharmonic orchestra “Borislav Pašćan” in Serbia. In diverse Viennese orchestral constellations he regularely performes at the Vienna Konzerthaus, at the Theatre Palais Shönbrunn and the Palais Shönborn.
Spasoje Spasojević is currently playing on a violin by Charlelie Dauriat, 2015 from Gourville, France on loan to him by Prof. Tymur Melnyk.